Shinmen Takezou
Musashi Miyamoto (, Miyamoto Musashi) is one of the main protagonists in Vagabond, and a historical figure considered one of the greatest swordsmen in Japanese history. As a young man he embarks on a journey to become the strongest samurai after being exiled from his village. 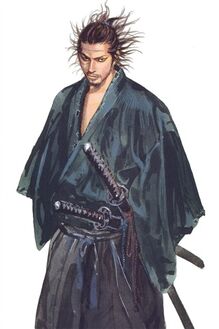 His appearance changes as the series progresses. As an adult he is a tall man around 180 cm (5'11").

As a young man, he tied back his hair. People often compare his hair to an explosion. After the Yoshioka arc, he is about 28 years old and he doesn't tie his hair back. He is covered with scars from the 70 Yoshioka students.

In the Last Manga exhibition, Inoue Takehiko had painted an older version of Musashi. This version is very similar to the self portait of the real Musashi.

In the beginning of the series, Musashi was portrayed as a hot headed young man driven by his desire to become strong, with a very aggressive personality.

One of the foremost reasons that drives Musashi to excel in sword-fighting, is his desire to overcome his father for all the harsh treatment given during his childhood and Musashi's incapability to rebel. This desire made him violent and feared by others, however Otsu was the only person who didn't fear him.

Growing up in the late 16th century Sengoku era Japan, Musashi was born as Shinmen Takezo, the son of a samurai family. His father Shinmen Munisai is one of the most renowned samurai across the nation. At a young age, his father divorced his mother and forced Takezo to learn martial arts. Takezo longed to see his mother again and show her how much he grown but his mother rebuffed him, telling him to return to his father. This resulted in Takezo's loneliness, which grew coupled with his fear for his father. On several occasions the young Musashi tried to assassinate his father but always failed, only to be beaten by Munisai afterwards. Takezo would run into the mountains through the bamboo forest to calm down. This led Takezo to train himself with nature, developing a close bond with the wilds. Once he found a swordsman's corpse in a cave and was awed, hoping to be like him. As a child, he became close friends with Matahachi Honiden and Otsu.

By the age of 13, he saw a challenge post by Kihe Arima and accepted the duel. Kihe Arima underestimated Takezo for his young age and Takezo killed the Kihe without hesitation. One time, Itō Ittōsai had travelled to his village and dueled with an unknown swordsman. Takezo heard of his stories and admired him. He even sculpted a demon statue and aspired to be like him.

At the age of 17, Matahachi asked Takezo if he wants to join with him to fight for the Toyotomi army against the Tokugawa clan at the Battle of Sekigahara. Takezo agreed to go with Matahachi, Otsu asked Takezo to protect him and he agreed. He encountered his fateful rival Sasaki Kojiro, Ittōsai and Musō Gonnosuke at the battle of Sekigahara. They fought together against the Tokugawa clan but Takezo was shot in the leg.

They fought a losing war, Takezo wasn't happy that he couldn't kill no one or the general. Two young samurai are forced to run away from the "survivor hunters". Soon they meet Oko, a mysterious woman who lives with her daughter, Akemi. She lets them rest and stay at their home. Later, there is a scene where Takezo and Akemi talk in the forest and get to know each other better. Suddenly, unknown tall man appears. Akemi says Takezo that it was Tenma Tsujikaze, the man who murdered her father. Tenma turns out to be a gang leader and is furious that Oko and Akemi constantly steal the weapons of fallen samurai from the battlefield. They do it to sell weapons and have something to live for, but it seems Tenma wants those weapons for himself. Later, there's a scene where Oko tries to persuade Takezo to have sex, but suddenly a gang of Tsujikaze appears. They want to take away the stolen weapons. Oko is defended by Takezo and Matahachi.

Before becoming Miyamoto, Takezo is a vicious man capable of drawing the fear and violence out of anybody, living by his wits and quickly killing anyone who crosses him. This behavior frequently got Takezo into trouble, earning him notoriety as a "demon child" and forcing him to live in the mountains. After one incident, Takezo was forced to cut himself off from almost all human contact except for assasains who came into the mountains from his village to kill him. Eventually, the monk Takuan and Miyamoto's childhood friend Otsu help to capture Takezo, who is subsequently hung from a tree for several days without food or water. During this time, Tsujikaze Kohei, the younger brother of a bandit that Takezo killed, comes to claim his revenge on Takezo (but only because Kohei wanted to kill his brother first). Takuan scares him away.

At the end of the arc, Takuan takes Takezo out to a remote area surrounding the village and talks to him. At the end of the fifth volume, we learn that Takezo has for the moment shed his rage and become a more graceful person - Miyamoto Musashi.

A swordsman appeared before Musashi with no intention to fight but Musashi's bloodlust driven him away.

In the recent chapters, he meets a young boy called Iori who recently lose his father. Musashi lived with Iori for some time and bonded with him very well. Iori becomes interested in swordmanship after observing Musashi practicing his sword. However Musashi encourages Iori to farming than wielding a sword.

It is unknown whether the contents of Last Manga exhibition is canon but the theme was "What if Musashi dies?"

It shows an elderly Musashi who resides in the mountain as a hermit living inside the Reigando Cave. It sets after Musashi finishes writing his famous book: "The Book of Five Rings". Musashi becomes more like Sekishūsai and Ittosai with the wisdom of Sekishūsai and the playfulness of Ittosai.

As a dying old man, he meets new and old visitors. One of the new visitor is Fuki who was introduced as a young boy listening to Matahachi's story about Musashi journey. Fuki admired Mushashi and desires to become Musashi last disciple. Musashi mistaken Fuki as Jotaro and he apologizes that he didn't do much as his master. Fuki tried to cut Musashi down when he thought Musashi was asleep but Musashi uses his fan to change the trajectory of the blade.

An elderly Inshun greets Musashi and kept his promise to meet him one last time, their encounter was like good friends.

Yagyū Jōnosuke and his grandson visited Musashi. It was revealed that Jōnosuke is Jotaro, it was hinted that Otsu may possibly be his wife when he mentioned she died last spring and was 8 years older than him. Jōnosuke tells Musashi that he will forever be remembered for his way of life and many people outside the gates waiting to pay their final respect to him.

Jōnosuke's grandson found out that Musashi dies peacefully, Jōnosuke was shocked and Fuki cries out for the loss of his master. His last thoughts were Otsu who comforts him by holding his hand and asked if he's okay and Musashi replied back he's fine.

He meets the people who were killed by him and makes peace with them: Ueda, Seijuro, Denshirou and Baiken.

He also meets his father, it was revealed that his desire to be "invincible under the Heaven" was to have his bond closer to his father. Munisai replied that only detest would grow but Musashi say that even detest is also a bond between them. Munisai was surprised and asked what did he desire and a few artwork revealed that Musashi wanted to bond with his mother and was willing to give up his sword. This indicates that Musashi truly wanted to have a family bond.

He also meets his spiritual teacher Inei & Sekishūsai who both agreed that it was fun to meet Musashi.

Kojiro as a young boy greets Musashi in the beach, he speaks to him and accompanies him to the after life.

At a young age, his father would teach him Jutte which helped him to create the two sword style.

Musashi is unique in terms of his sword-skill for the unfamiliar movements and lack of style he uses. This is due to the fact that he spent most of his entire time in the forest having been labelled as a demon child by his village for his demeaning and wicked nature. Frankly, the forest is his home and where his master resides.

He is known for his arm strength, in the Yagyū arc he was able to cut a steel sword with one hand.

Swordsmanship: Niten Ichi-ryū (二天一流; literally meaning: "Two Heavens as One Style") - he created the two sword style by wielding a katana on the offensive right hand while the Wakizashi on the defensive left hand. He questioned himself why Japanese swordsman only use one sword during fights. He displayed full use of the two sword against Tsujikaze Kōhei/Shishido Baiken.

One of the secrets of the technique is to throw the wakizashi blade like a shuriken/kunai.

As a young man, Musashi often carved and carried Bokken (wooden swords) to use in fights. the lethality of these weapons varied, and while Musashi manged to kill many of his opponents with Bokken, a number of his more skilled opponents managed to survive their bouts with only minor injuries.

He was later given a set of swords by Inei; a Katana and wakizashi. 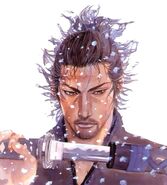