Oko (, Okō) is the mother of Akemi. She became a prostitute after leaving with Matahachi to Kyoto where she currently resides. She had an affair with Matahachi, creating conflict with his fiancée Otsu. Her husband was murdered.

Oko has long black hair that is usually loose and flowing. She has clever-looking face.

Oko is strong woman who was able to take care of her daughter and find ways to get money after the death of her husband and endure Tenma and his gang's bullshit. She is seductive and used that to the best of her advantage in order to protect her daughter and herself. Her seductiveness allowed her to be a very good prostitute and it was also the reason why Matahachi never left her. As a result of not having a husband, Oko is very independent and never depended on Matahachi for money.

Oko's husband was killed by Tenma Tsujikaze and his gang when her daughter Akemi was young. After the death of her husband, Oko found various different ways to bring in money. Often times, she would do the activities with Akemi and make her complacent.

During the aftermath of the Battle of Sekigahara, Oko and Akemi stole weapons of dead fighters so that they could later be sold. While gathering weapons from the aftermath of the Battle of Sekigahara, Akemi found Takezo and Matahachi passed out and brought them home where their wounds were tended. Once they healed, Oko suggested one of them to marry Akemi and asked her which one she prefers, but she didn't reply.

While Matahachi and Takezo lived with Oko and Akemi, Oko attempted to seduce both of the boys. While Takezo refused any advances, Matahachi quickly became her lover.

During their stay at Oko's home, Tenma Tsujikaze and his bandits showed up. Tenma tells Oko to not visit the battlefield and steal the weapons and attempted to take the weapons that they had collected. Tenma states that he is in love with Oko but she says she could never love the man who murdered her husband. As Oko tries to lure Tenma near her, Matahachi and Takezo kill him and multiple other bandits. As an act of revenge, the next day, the remaining bandits show up again. Takezo kills the rest of the bandits including Tenma Tsujikaze while Matahachi and Oko were having sex in the forest. After the death of Tenma, Akemi, Matahachi and Oko left for Kyoto in order to not be killed by his brother.

In Kyoto, Oko opened a brothel and worked as prostitute. Matahachi and Oko married while residing in Kyoto. Oko was the breadwinner of the family and Matahachi used Oko's money for drinking. Oko eventually kicked Matahachi out since he didn't have a job. 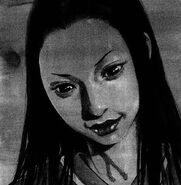